The Role of Coaching in Leadership Development 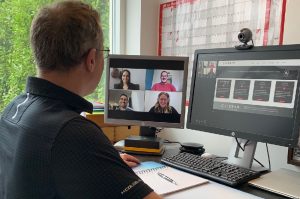 Jim Collins identifies leadership, specifically level 5 leadership, as the foundation that differentiates companies from being good or great. His research concludes that it is the leader’s role to inspire trust, create vision, execute strategy, and build and develop a team around them. Collins identifies two levels of leaders an “Effective Leader” who “catalyzes commitment to and vigorous pursuit of a clear and compelling company vision, stimulating higher performance standards” and a “Level 5 Executive” who “builds enduring greatness through a paradoxical blend of personal humility and professional will”. The level 5 leader is focused on the greater good and success of the company, team, organization rather than their own personal goal with Collins stating that these individuals are “incredibly ambitions, but their ambition is first and foremost for the institution and not themselves”.

In “Discover your true north” Bill George establishes the key trait of true leaders is authenticity stating, “authenticity is the natural way of leading and authentic leaders have learnt from their crucibles and setbacks, they know that they must be authentic to gain legitimacy with those they work with and their multiple stakeholders”. George’s research identifies that authentic leaders who follow their “true north” are committed to building value for their institutions, in the same vein as Collins’ “Level 5 leader”.

However, leaders are not only in the “C-suite” of organisations but at every level of a business or team. In an organization the middle and lower management leaders are essential for the execution, interpretation, and development of plans. Here leadership can be exercised through “doing the Job” and guiding or supporting their team as whilst executing the plan.

Leadership development is clearly complex sometimes described as “an art and is often about emotions rather than facts and about people management rather than tasks”. As talented individuals and managers move through organisations they transition into positions which require less functional expertise and more about leading through their team and their ability to build and maintain a high performing team. Research identifies that many managers fail because of their inability to change their behaviors they become more senior and transition into leadership roles. Pelham builds on this identifying that if a manager is successful because of their technical expertise as they are promoted “their new leadership role is more about influencing and developing others their current, existing strengths will not be enough”. The transition into a leadership role and the development of leaders is therefore more about improving softer interpersonal skills and behaviors than technical or functional expertise.

The role of coaching in leadership development

Coaching is recognised as an effective method to unlock and improve emotional intelligence in individuals, providing a framework to discover, challenge and develop their thinking, emotions and behavior. Clutterbuck states that there is a compelling need for leadership coaching in the 21st Century, in that coaching supports people to manage transitions, personal development, goal attainment and organisational change. Goldman also states that “developing emotional intelligence has become a key part of the coaching agenda for most people in leadership positions”. Pelham also identifies that the transition from a functional manager to a leader is “probably not just a matter of adding a new behavior to an existing set because the change goes deeper” adding “you may need to challenge ingrained patterns of behavior”.

As a result, leadership and executive coaching has developed as part of learning and development programs within many organisations.  As individuals transition into new, more senior and leadership roles coaching is clearly an effective mechanism to help them re-evaluate existing beliefs and habits to ensure that they maximise their own potential and their team.

We use cookies on our website to give you the most relevant experience by remembering your preferences and repeat visits. By clicking “Accept”, you consent to the use of ALL the cookies.
Cookie settingsACCEPT
Manage consent

This website uses cookies to improve your experience while you navigate through the website. Out of these, the cookies that are categorized as necessary are stored on your browser as they are essential for the working of basic functionalities of the website. We also use third-party cookies that help us analyze and understand how you use this website. These cookies will be stored in your browser only with your consent. You also have the option to opt-out of these cookies. But opting out of some of these cookies may affect your browsing experience.
Necessary Always Enabled
Necessary cookies are absolutely essential for the website to function properly. These cookies ensure basic functionalities and security features of the website, anonymously.
Functional
Functional cookies help to perform certain functionalities like sharing the content of the website on social media platforms, collect feedbacks, and other third-party features.
Performance
Performance cookies are used to understand and analyze the key performance indexes of the website which helps in delivering a better user experience for the visitors.
Analytics
Analytical cookies are used to understand how visitors interact with the website. These cookies help provide information on metrics the number of visitors, bounce rate, traffic source, etc.
Advertisement
Advertisement cookies are used to provide visitors with relevant ads and marketing campaigns. These cookies track visitors across websites and collect information to provide customized ads.
Others
Other uncategorized cookies are those that are being analyzed and have not been classified into a category as yet.
SAVE & ACCEPT