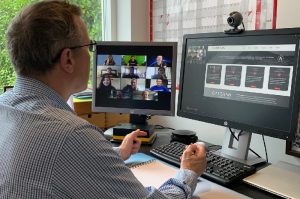 Most human resource professionals believe that coaching is an integral part of the HR toolkit for improving skills and behaviours within organisations and that coaching helps executives become more effective leaders. This article briefly explores three elements of leadership development where coaching is seen to have a positive impact for the individual and for the organisation: increased awareness of emotional intelligence, supporting role transition and organisational transformation.

Emotional intelligence – Goldman describes emotional intelligence as “the capacity for recognising our own feelings and those of others, for motivating ourselves and for managing emotions in our relationships with others”, Susing’s research also identified self-awareness and self-management, as two of the fundamental focusses of executive and leadership coaching.

Collins discovered that the leaders who have the potential to evolve to “level 5 leadership” have “the capability within them, perhaps buried or ignored and under the right circumstances – self-reflection, conscious personal development or a coach they begin to develop”. Supporting the fact that coaching is an efficient method to increase an individual’s awareness of their emotional intelligence, Collins talks about this as a “Black box”, namely the inner development of the individual to become a “level 5 leader”.

Pelham believes that “these skills and capabilities cannot be learnt from books, lectures or models – but the heart of such learning is involved in engagement that enables the individual, in a direct or emotionally engaging way to discover more about themselves and inground patterns of relating to themselves and others”. Supporting this research by Bertrand looked at the effectiveness of executive coaching to improve the leadership capacity in academic Deans in American higher education institutions found that because of the coaching the Deans described improvements in empathetic behavior, self-awareness and selfcare which benefited them on a personal level not just professionally.

Role transition – An area where coaching is generally incorporated into leadership development is in recruitment, induction, and role transition. Goldsmith observes that one of the frequent reasons for hiring executive coaches is that the leadership behavior that was associated with the individual’s previous role and results may not be the behavior that is needed to achieve the goals of the new role.

Role transition is an area of coaching where a “return on investment” or alternatively the lack of investment in coaching can be measured. Bond and Naughton state “when leadership appointments fail or the transition is not managed effectively the organisation can suffer due to additional recruitment costs, loss of productivity and disruption to the rest of the organisation”. Van Clarke’s research identified the positive impact of coaching, during that Logica-CMG merger where a leadership coaching program was incorporated with the results of reducing the attrition at senior management levels over a three-year period from thirty-three percent to ten percent.

Coaching also supports managers transitioning into a leadership position, Wolf and Sherwood identified the challenge of moving from a technical to managerial role, from technical expert to a broader range of functional, interpersonal and communication skills. The study concluded that “coaching was a valuable way of helping new managers to evaluate the validity of their values, beliefs and experiences for the new role and consider alternative behavioral options”.

From a personal perspective I saw the benefit of coaching in a role transition in 2012, six months after joining a new business I invested in an executive coach. The coaching took place over a ten-month period with multiple sessions including a “360 EQi evaluation” which incorporated feedback from managers, peers, and direct reports. I found the coaching beneficial in two distinct areas; firstly, in helping develop a deeper understanding of my behavior and how it was perceived by colleagues and direct reports; secondly, the sessions were utilised to run through scenarios and options with the coach becoming a sounding board and facilitator helping to work through options and effective ways to implement effective change.

Team coaching has evolved as an effective method to initiate and facilitate transformational change and build a bond or cohesion within a team around joint goals or a different approach. Clutterbuck identifies that the coach raises “a collective awareness of fears, motivations, ambitions and emotions of team members to equip the team to engage in systematic sustainable change”.

In March 2000 I was involved in a team coaching exercise preparing for the BT Global Challenge, an around-the-world yacht race. Over a three-day period, a team of twenty-eight individuals were coached through Tuckman and Jensen’s (1977) “forming, storming, norming, performing” model with the output being an agreed and aligned vision, goals, and team values. Three coaches facilitated sessions where team members highlighted their hopes and concerns, and introduced models that would be beneficial during the ten-month race such as; how to give and accept feedback, the “push pull” model, incorporating new members to the team and conflict resolution. The learnings were captured in a document entitled “we are all in the same boat” with personalised “value & goal” cards created for each team member. The crew also had several one day follow up coaching sessions prior to and during the race, in one of these crew members bought one family member or close friend, recognising the broader impact to friends and family of the 10-month challenge. The result of the coaching was that “Team Logica” was one of the closest and best functioning crews in the 2000/2001 BT Global Challenge.

Based on theory, research, and personal experience there is significant evidence to support the statement that “coaching has a key role to play in supporting leadership development”. As individuals transition into new, more senior and leadership roles coaching is clearly an effective mechanism to help them re-evaluate existing beliefs and habits to ensure that they maximise their own potential and their team. I also believe that for coaching to firmly establish itself within an organisation there needs to be an integrated approach, with aligned goals, measurement criteria, and support through the organisation creating a real living coaching culture.

We use cookies on our website to give you the most relevant experience by remembering your preferences and repeat visits. By clicking “Accept”, you consent to the use of ALL the cookies.
Cookie settingsACCEPT
Manage consent

This website uses cookies to improve your experience while you navigate through the website. Out of these, the cookies that are categorized as necessary are stored on your browser as they are essential for the working of basic functionalities of the website. We also use third-party cookies that help us analyze and understand how you use this website. These cookies will be stored in your browser only with your consent. You also have the option to opt-out of these cookies. But opting out of some of these cookies may affect your browsing experience.
Necessary Always Enabled
Necessary cookies are absolutely essential for the website to function properly. These cookies ensure basic functionalities and security features of the website, anonymously.
Functional
Functional cookies help to perform certain functionalities like sharing the content of the website on social media platforms, collect feedbacks, and other third-party features.
Performance
Performance cookies are used to understand and analyze the key performance indexes of the website which helps in delivering a better user experience for the visitors.
Analytics
Analytical cookies are used to understand how visitors interact with the website. These cookies help provide information on metrics the number of visitors, bounce rate, traffic source, etc.
Advertisement
Advertisement cookies are used to provide visitors with relevant ads and marketing campaigns. These cookies track visitors across websites and collect information to provide customized ads.
Others
Other uncategorized cookies are those that are being analyzed and have not been classified into a category as yet.
SAVE & ACCEPT